We are once again entering the share circle, my friends. Embrace the closest book to you and repeat after me: I, fellow bookworm, do solemnly promise to refrain from passing judgement upon my fellow bookworm, A.C. Autry, as I see the before photos of her office. I also solemnly promise not to throw cleaning supplies, magazine clippings with organizational tips, or hoity-toity leers in her direction. I understand that she is human and had just finished writing her second book, Rise of the Seer, when these pictures were taken. I support her theory that a good writing day is more valuable than a clean desk. May I suffer the anguish of a dozen paper cuts soaked in lemon juice should a leer creep onto my face or a dust rag accidentally leave my hand and fly in her direction.*I will also purchase a million copies of each book she writes.”

Thank you so much for saying that. I feel like we can now proceed into what my life was like before yellow walls. Ooops, I should have said spoiler alert there.

Here’s some back story on the room we now call “The Office.”
Once upon a time a young family moved into the house they had waited for for seven years. It was finally a place to call their own where they could plant anything they wanted. Even corn. But that doesn’t grow well here, so they never tried.
They chose their own house plan so they could have a room dedicated solely to musical gear. It was to be “The Music Room.” The gear came in and the years passed. And more gear came in and more years passed. Then the fact that they had no garage came back to bite them in the drumstick. And the gear stopped trickling in as the need for a place to complete school projects arose. Slowly but surely, “The Music Room” morphed into “The Storage Room/Cave of Despair.”
Hark! Our aspiring author emerged from the sanctity of naptimes and snacks with Curious George to begin creating a story. The more she created, the longer she was in “The Cave of Despair.”
UNTIL ONE DAY. A vision of sunny walls and LESS STUFF filled her eyes as possibility kicked around in her imagination. They could give this sad room with the perpetually closed door the identity it had so desperately lacked. And they did. And there was great rejoicing in the land.
The End.

My friends, I present to you “The Cave of Despair.” 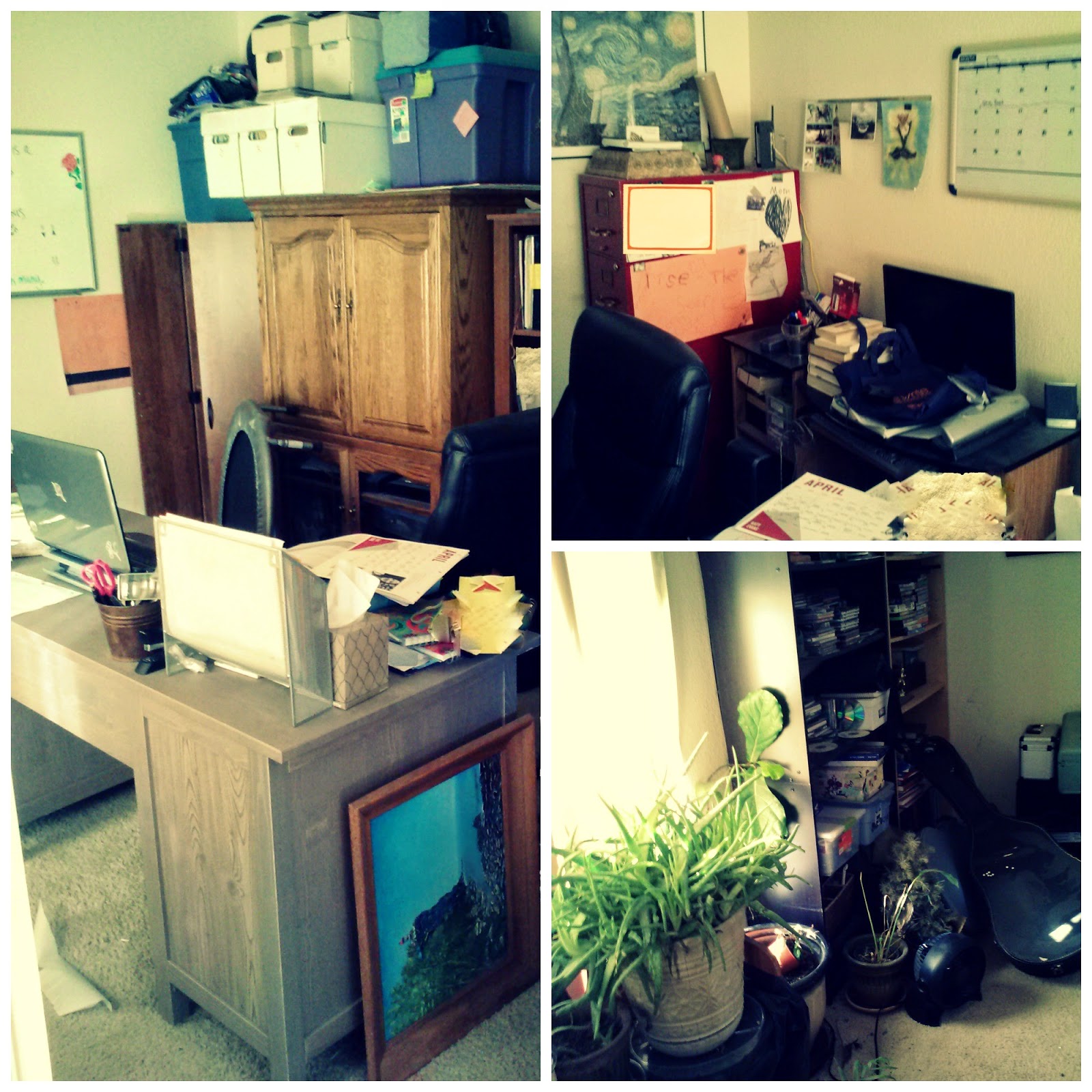 As you can see, that wasn't an environment most conducive to writing or anything of a creative nature. In the beginning of the year I made a commitment to writing and have taken steps to jump in completely. I needed a space to match the vision I'm chasing.

So after a month of chaos and throwing out so very much clutter, now I present to you (with its official title and identity), "The Office." 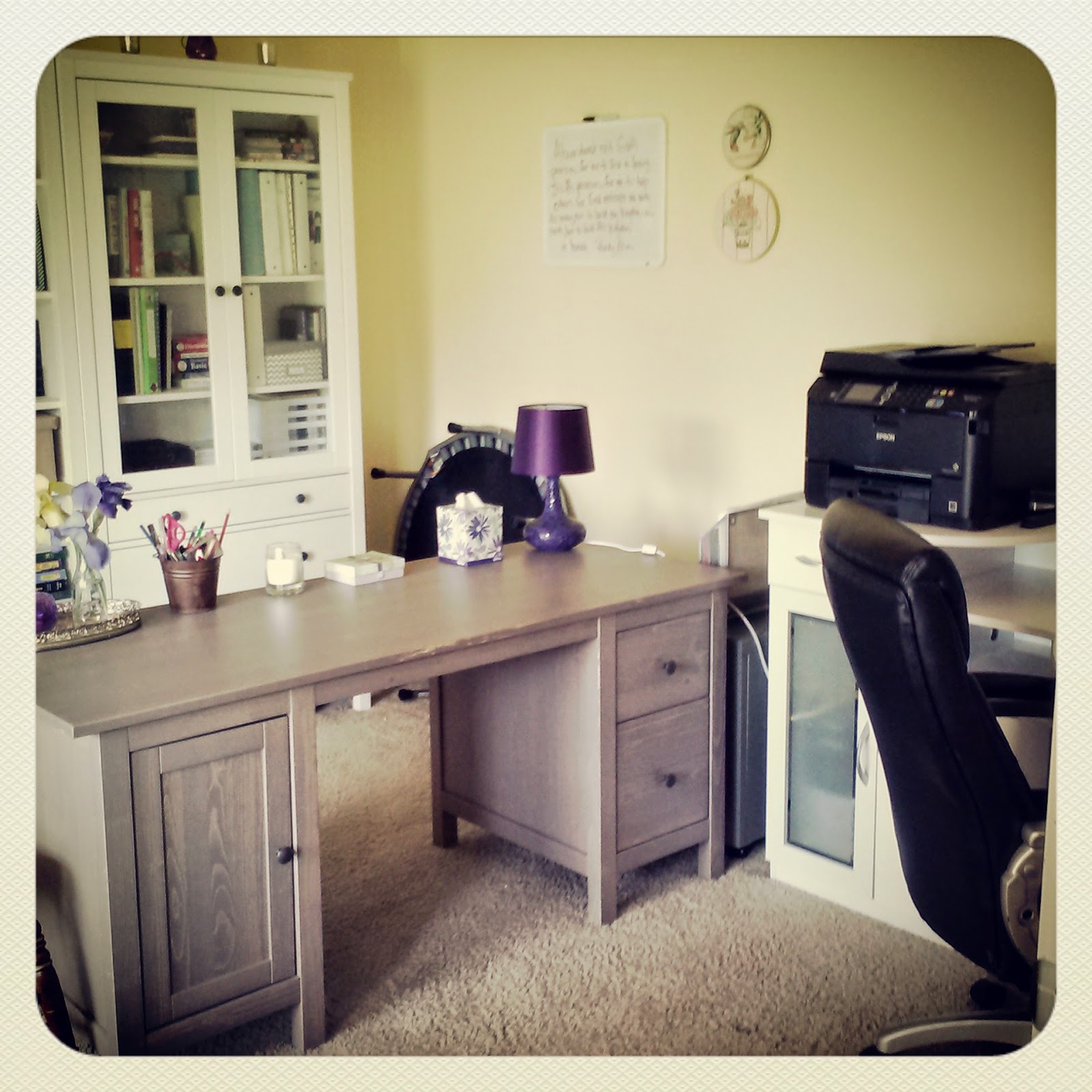 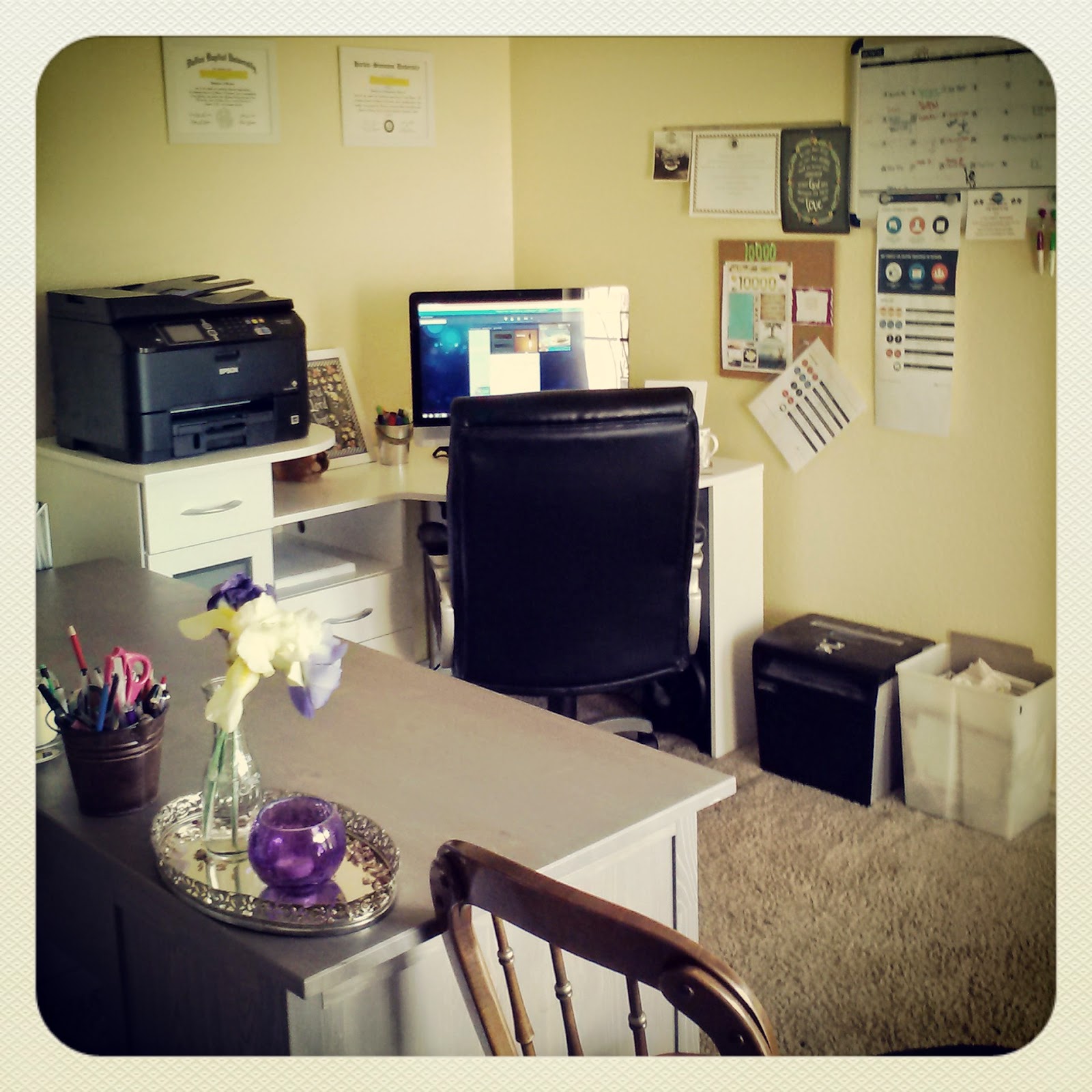 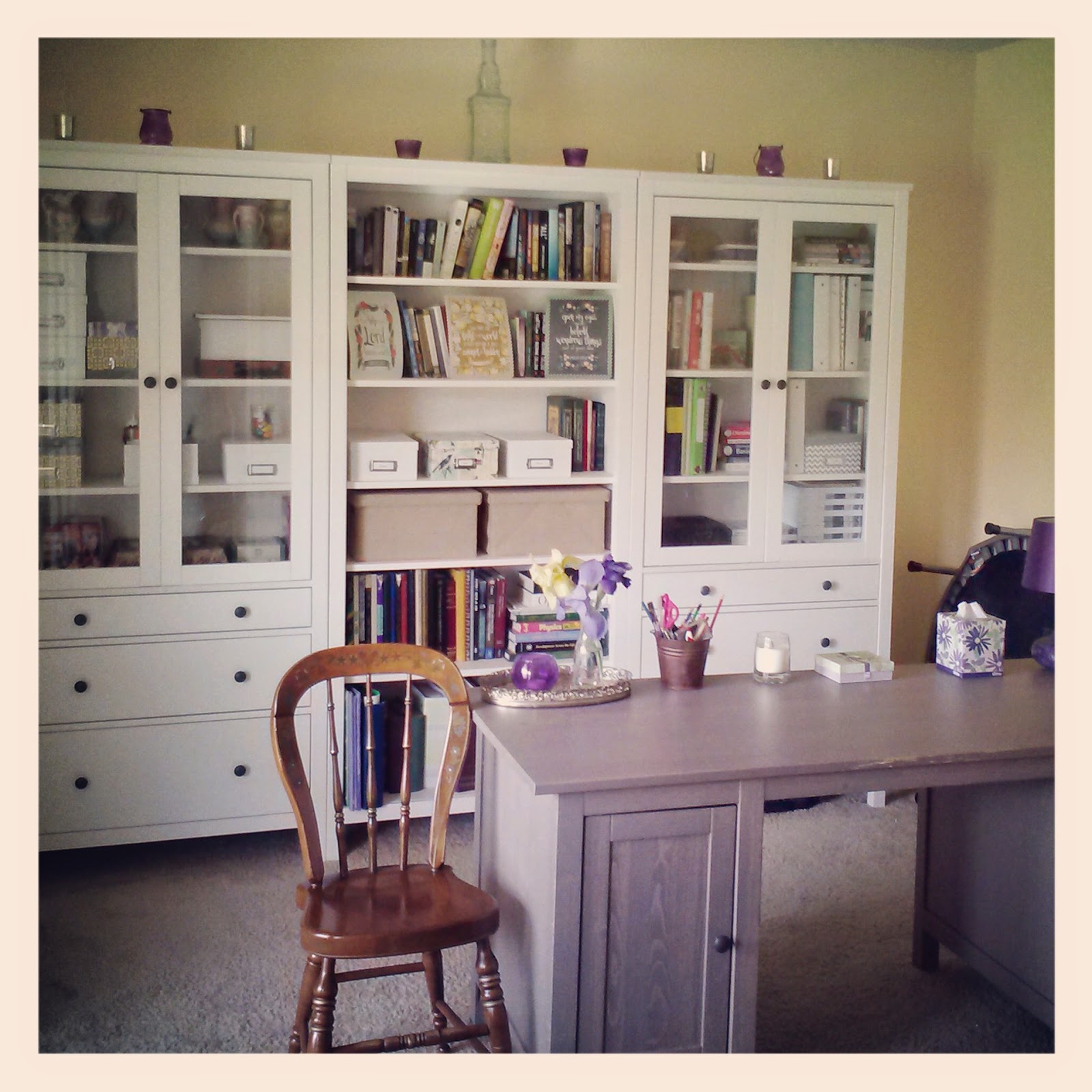 I'm really happy with the results for many reasons. The first reason is because in order to avoid filling this space back up with all of that junk, we had to get rid of so much stuff. It's liberating. It's also a place where we can all work now. Let the school projects resume! And the guitar playing! And the writing!

A word of caution if you are thinking of tackling a project like this for your own office. If you put up white boards, messages WILL randomly appear at any given time. I had the privilege of finding this one: 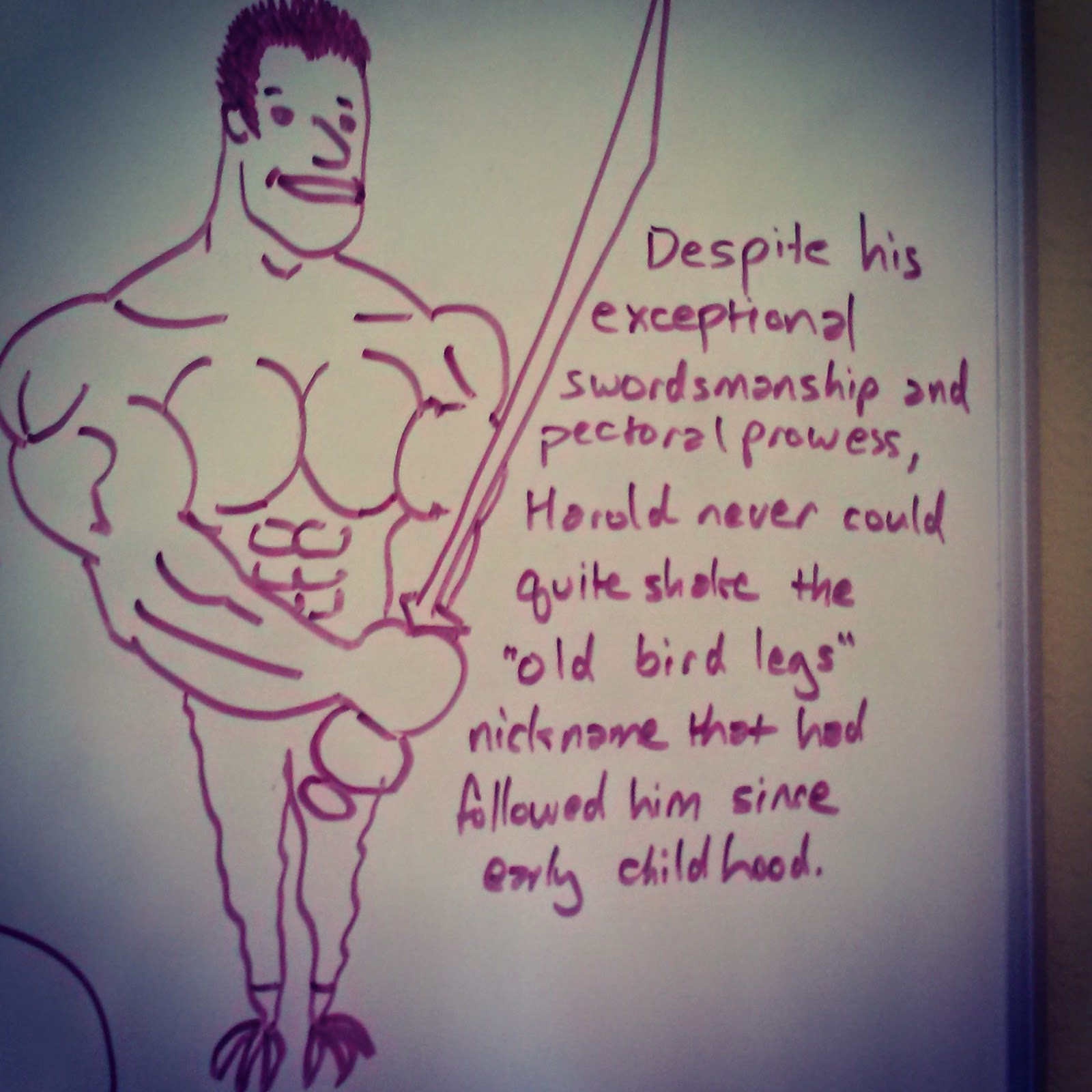 And there was great laughter and rejoicing in the land.
The End.

*I see that you are a person who is attentive to detail. That's an admirable character trait. I don't expect you to REALLY purchase a million copies of every book that I write. We can just meet in the middle here and call it a good 500,000. That works for me. How about you? Good. I'm glad we took care of this little arrangement. You're the best!
Posted by Unknown at 9:22 AM

Email ThisBlogThis!Share to TwitterShare to FacebookShare to Pinterest
Labels: "old bird legs", "The Cave of Despair", Always follow the asterisk, Before and after, Don't follow the lights