Down Came the Rain

It's Wednesday. You know what that means! I hope that you said, "New blog post!" You're correct, by the way. May is still screaming by, just like always. But unlike always, we're a soggy mess right now. I had mentioned in a Facebook post about scouting locations for a Ransom of the Healer book trailer. It's a very exciting idea and I am looking forward to turning it into a reality.

We found the perfect location and figured out the means to get there. I was planning costumes and beginning to put together the ideas for camera shots. Things were moving along well. And then the skies opened up. I'm sure by now you've seen the video footage of the exorbitant amount of rainfall the Lone Star has received as of late. My heart hurts for my fellow Texans who have lost lives, loved ones, and homes. We're used to crazy weather here, but this is more than we've grown accustomed to. It's downright staggering. Twenty of the last 26 days have brought rain to our area.

What does the rain have to do with the book trailer? Our key location was on the remains of a bridge in a lake that has been accessible for a few years. That bridge is no longer an option. Now, please forgive my horrible photography. Some of these pictures were accidents and I had no intention of sharing them on my blog when I took them. But I changed my mind so you can see this and marvel with me.

This first picture was taken on the first of May when we were scouting the location. I'm actually standing in the predominately dry lake bed looking back towards the shore. (It was an accidental picture as I was trying to avoid hidden animals that both screeched and hissed at us.) 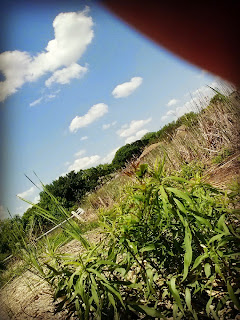 Fast forward several thunderstorms and two weeks later and you have a vastly different location. This was taken from the other side of the lake. That tiny speck in the picture is what was left of a portion of the bridge I could have walked across on the day I took the first picture. I haven't taken a picture in the last few days, but the tops of the rails are just about submerged again. 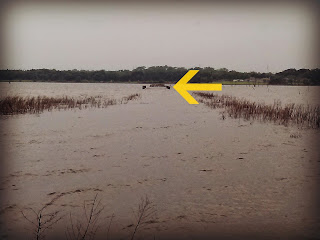 I'm not about to complain about rearranging filming when people have suffered so much and are still dealing with the ramifications of the storms. I've just been amazed at the sheer volume of water in a land that's been suffering a significant drought for the last several years.

As I was wading through a flooded field I came across these floating blobs. If you've ever wondered how ants survive when their nests are flooded, here you go. They band together and form islands. I had never seen this before but I found it fascinating. 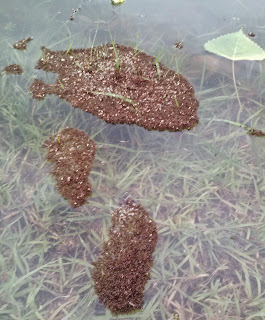 I've found other things fascinating during our monsoon season. Like this, for example. I love when one of these pops up after a storm, but when two of them are there, you must stop and stare until they vanish. 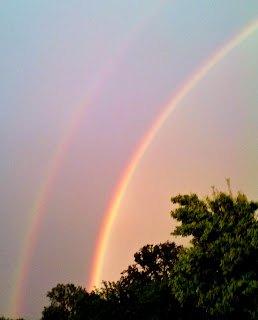 And just two nights ago after another severe thunderstorm, the prairie sky was once again wide and high. (Insert hand claps here.)

As the water begins to recede, let's continue to take care of each other out there and remember that people are the priority. And soak in those sunsets. Beauty has a soothing quality about it and there are some out there who could use a touch of it today.
Posted by Unknown at 12:44 PM 2 comments:

"Wednesdays are for blogging," she said.
"But I demand your constant attention," May said.

It's that time of year again. In a valiant effort to make every moment count, the month of May roars in and threatens to remove all semblances of order and routine for four consecutive weeks of end of the year activities. Yes, it takes an entire month to end the school year. When the chalk and ghosts of assignments past finally settle, I will have attended no fewer than six awards ceremonies and other various "final performances."

We are heading face first into summer vacation around here and I give. Bedtimes are stretching out later and later as the sunshine continues to cascade through the blinds in the evening. Our wardrobe choices have relaxed into a "just make sure it's clean" system and I don't even bother to check if socks match anymore. The nostalgic laissez-faire household policy of summer living is creeping in and waffles are served for dinner, flip flops have taken up residence on the front porch, and reading cots are permanently stretched out in the living room. It's a wonderful time to be alive. It's a challenging time to try to write.

I'm making it work though! In between book battles, band concerts, track meets, and appointments for a broken bone, I'm chipping away at the rewriting process. I'm overdue for a blog post, so I just thought I would drop a quick snapshot of life barreling down the highway to summer. I know it's like that for the majority of us out there. Just remember to take a moment to kick off your shoes, have a glass of iced tea, and breathe. We've almost made it. In just a few weeks we'll be wondering where on earth our summer vacation went. One day at a time, my friends. We're smack dab in the middle of soaking up the moments that become memories. Some things just shouldn't be rushed. 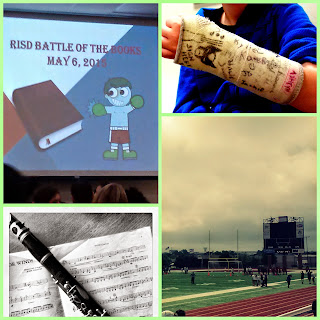