To Boston and Back Again: A tale of travels from a self-proclaimed socially awkward introvert.

(Remember when I mentioned that I had several things written that I never posted? This is one of those. I'm tired of it looking at me with its judgy, unpublished eyes when I log in. So, here you go! Better six months late than never.)

In a house in the country lived a writer. Not a well-traveled writer, but one who hadn’t been on an adventure in far too long. When the opportunity to take a trip to Boston was presented, the creatively thirsty word worker jumped at the chance to step away from the ever glowing computer screen and meet new characters. Below is the account of this quasi impromptu trip. 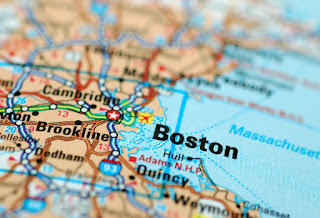 Day 1:
I haven’t flown in five years. A three and a half hour flight seems like a great way to get back into the habit. (If only someone would invent a sarcasm font.)  The flight was very bumpy with quite a bit of turbulence. I found myself realizing more than once that I needed to get outta dodge. And by dodge I mean the metal tube hurling me through the heavens. It was horrible. Thankfully the view of Boston Harbor eventually popped up and salvaged what remained of my sanity and ability to retain my breakfast.

And then we started banking and the world shifted to an angle my brain did not want to process. I actually heard equilibrium laughing at me as it parachuted to the land where it belonged.

So what do you do when you finally touch down and your stomach is unsure which way is up? You head for Faneuil Hall! (Sarcasm font initiated there.) If you’ve never been there before, it is a gauntlet of pretty much any food you could ever want. We’re not talking mall food court though. The amount of options could have been intimidating, but I had already decided I would be adventurous. This is what adventure looks like to someone who eats beef maybe a couple of times a month: 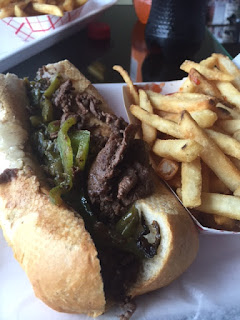 After some much needed downtime, and by that I mean lying perfectly still for almost two hours, the earth was stationary enough for me to venture out again…just in time for dinner. We ended up at The Black Rose where a group of "slightly" inebriated folks were singing Irish ballads in the corner. The volume was stuck on an 11 and I didn’t think I could love it more, until things slowly devolved into an awkward and slurry version of “Teddy Bear.” You win some, you lose some. 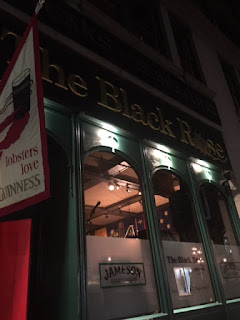 Day 2:
I hit the streets alone and stumbled upon this: 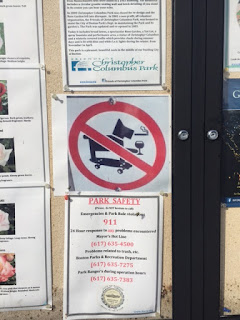 They really don’t want their dogs to have any fun in Boston.

I’m just going to post my touristy photos here. I went to the New England Aquarium and may have smiled to myself at all of the parents wrangling kids while I was free to do pretty much anything I wanted without being responsible for anyone else. 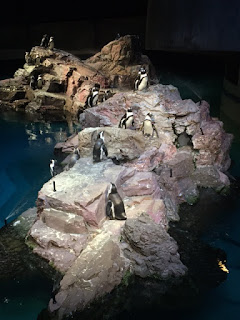 Everything was fun and penguin filled, and then things took a turn.

I’m going to preface this by saying, no disrespect is intended in the following account of this situation. I highly doubt the authenticity of this particular man of the cloth. A monk had tried to catch my eye on Day 1, but I was all, “Oooh, Boston!” and I didn’t make eye contact. I was also with a 6 foot+ traveling companion. This day I was flying solo and the monk walked right in front of me and shoved something in my hand. I almost died. Three things happened at once:

At this point I want to end this confrontation at all costs. And by all costs I mean reaching in and pulling out a five dollar bill while this guy is leaning over trying to look in my wallet. Seriously. I hand him the five and he shakes his head. He then pulls out the notebook again and flips to the page where people have donated $10. The fight response finally kicks in and then I kick him.

Just kidding. I wouldn’t do that. Yet.

But I did put the amulet in his hand and try to grab the fiver back. Suddenly five dollars was enough of a donation for him. He smiled and went on to looking for the next philanthropist. So if anyone is interested, I know where you can purchase an amulet for "real cheap." I’ll sell it to you for a $10 "donation." 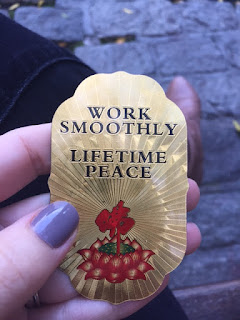 After that I was peopled out. I spent what remained of the afternoon with a cup of mediocre coffee and Norman Rockwell. 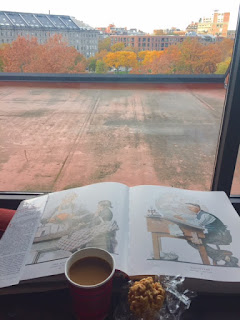 And promptly fell in love with this print: 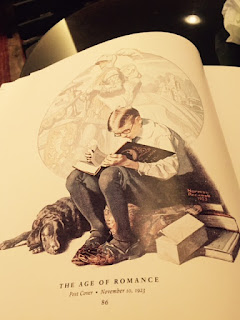 This post is getting a little long and we all know how fun it is to sit through vacation photos. I’ll wrap this up by saying, sometimes it’s good to get 1,500+ miles away from your comfort zone. Mine was a whirlwind trip, but I’ve been to Boston. I will always be able to say that.

And if you open a pack of crackers on the dock you are guaranteed to have company... 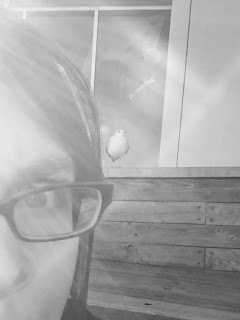 Email ThisBlogThis!Share to TwitterShare to FacebookShare to Pinterest
Labels: a gull wants what a gull wants, Boston, Coffee and Rockwell, fake monk?, swindled